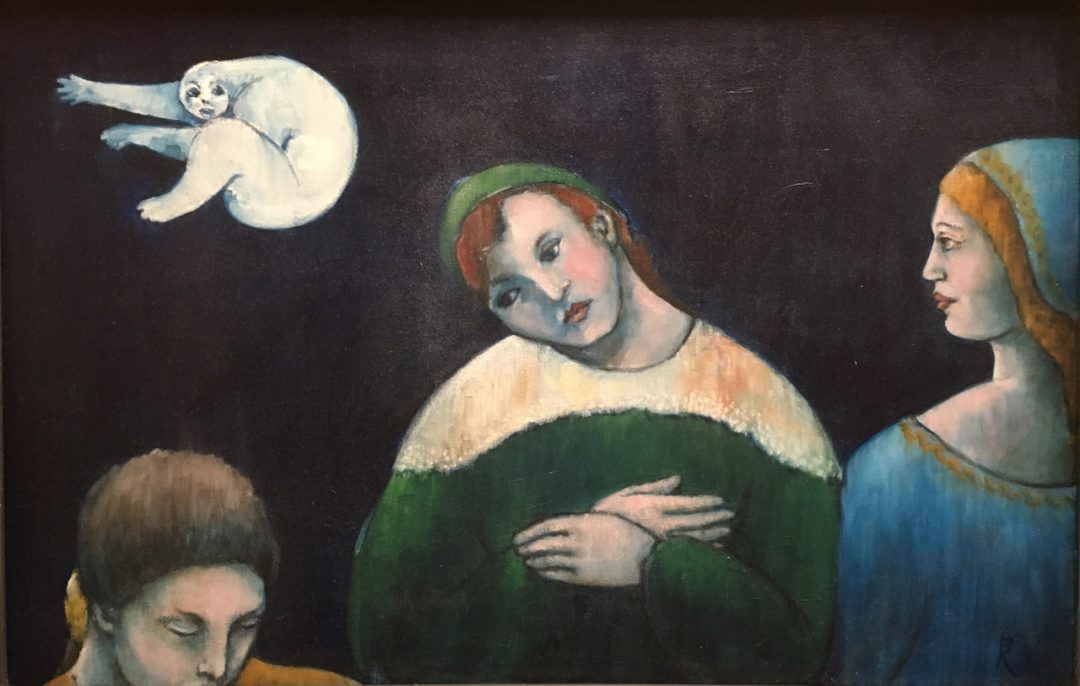 Chemainus sculptor, artist, writer, Bernice Ramsdin-Firth, at 84, has been shaped by the experiences of a rich and varied life, and she’s still looking for media and techniques to express how that feels and what it means.

She, and her husband Gord, live in what can best be described as a comfortable ‘West Coast Californian’ style home on Lang Street. Every square inch of their shady half-acre has a ‘lived-in’ feel to it. From her circular, sunlit studio; to the back yard, with its statues, pond, trees, pergolas and creek; to the book lined study and cheery Victorian living room, the place exudes an aura of casual but thoughtful adaptation.

Bernice Ramadan-Firth, featured at the Rainforest Arts gallery through June, 2018, talked to us about her life experiences and work.

It bespeaks her roots. “I came from a very British family, on both sides,” Ramsdin-Firth said. She was steeped in social and artistic traditions that can perhaps be traced back to the late 19th and early 20th Century Romantic period, her youthful experiences intensified by: her father, whose day-job as a photo-engraver for the Toronto Star was contrasted by his life-long passion as a talented artist; and mother, who took to the stage at the University of Toronto’s Hart House Theatre.

Ramsdin-Firth remembers vividly weekly childhood walks with her sister and father. “He used to take us to the Ontario Art Gallery and the Royal Ontario Museum every Sunday in the winter,” she said. In the summer months they would often explore nature in Toronto’s Don Valley “before the expressway went through.” Said Ramsdin-Firth, “When we weren’t at the art gallery or the museum, we’d be down there.”

On one of those excursions Ramsdin-Firth saw a painting by Salvador Dali, The Soul of a Smile, which triggered a seismic shift in the young artist’s perceptions – and a break with her past. “I looked at that painting, and I looked at it, and I finally got it,” she recounted. “I guess that I was about nine, and I was really thrilled that I got what it was that he was trying to say.”

“Ever since then, art hit me as not just a lot of pretty paintings. There was an emotional aspect to them as well,” she said. “In my best work I have a deep emotional context, or idea, something that really makes me feel strongly.”

Seventy-five years on, the transformative experience of making and viewing art still shapes Ramsdin-Firth’s life. “I’ve always done things that I just felt like doing,” she said. “I don’t work for what other people want me to do. I often get into difficulties over that because, either they don’t sell, which is okay, excepting to people who really do understand what it is that I’ve been doing.”

Her work will be on display on the featured artist’s wall at Rainforest Arts through June. You can also buy copies of her five illustrated children books in The Other Side of Magic series at the gallery, and copies of The Extraordinary Tale of Sammy Snail and Other Stories, which are versions of stories her father made up on their long Toronto walks.

Bernice has written a musical play based on Hans Christian Anderson’s, ‘The Tinderbox’ and another, ‘The Naming of Charley Salmon’. She is presently working on a Sci-Fi novel for young adults.