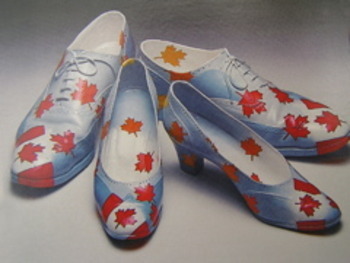 Special Feature on our Opening Day!

Opening day of Rainforest Arts is July 1st and we have a special treat for you. Renowned artist, Diana Durrand will be at the store talking about her Canada Expo ’86 commission.

The idea came to Diana to pitch a project for Expo ’86 while emerged in working on sculptural forms at the time. She wanted to do a series of sculptures that represented each province. She managed to get a meeting with Tom Gaff, curator of the new Canada Place Pavilion, and after a lengthy brainstorming session, the pair agreed to an idea to present the humorous side of Canada.

Since the theme of Expo 86 was transportation, Diana decided to focus on ‘walking’ by searching out appropriate footwear for each province and territory and painting images on them that would reflect the personality of each region. After the commission was set, Diana scoured thrift stores, asked for RCMP boots and even raided her father’s closet to scoop his hand crafted ski boots.

The Shoe Set went on tour in B.C. after Expo 86 and eventually ended up in the permanent collection of the Museum of Civilization in Montreal.

Diana talks about the many highlights the project had for her. They included an interview with Peter Gzowski on CBC and a hand written letter of congratulations from Pierre Trudeau.

To show her gratitude for his support, Diana decided to paint a pair of wearable shoes for Tom Gaff which she entitled “Oh oh Canada”. Since then, she was excited to learn they have now been given as a gift to Green Party Canada Leader Elizabeth May.

Rainforest Arts is delighted that Diana is part of our organizing committee where her vast experience, professionalism and gentle style keep us all grounded and motivated to provide Chemainus with an outstanding retail outlet for Island artists.

Diana is looking forward to meeting our friends and customers throughout the day on July 1st and will be selling her limited edition arts cards of the Canada Shoe Set, which is a set of 13 cards. Diana has generously announced that she plans to donate the proceeds from the cards back to Rainforest Arts to help with our many start up costs.

Thanks Diana! We love you!