Eleven years ago, Antonia Olak was walking in the trails near her home in Qualicum, when she encountered a couple of equestrians, one riding Gypsy, the horse that would inspire a series of paintings capturing the spirit of its kind: freedom, speed and surging power.

It was a eureka moment. “That whole experience will never leave me, I was just so excited,” she said, recalling the instant. “I was doing horse profiles before then, but this is the one where everything clicked, and I realized what I was doing.”

Olak wanted to capture the essence of the animals in abstract representations. More than that, she wanted to separate the equine qualities from any background noise, and place her likenesses on absolutely still canvases.

“I feel that extra space gives it a bit of weight, it’s a very quiet image, not quite vulnerable, but just calm,” she said. There’s a felt-tension between the abstract representations of the horses, and the limitless background – the works capture her subjects’ essence, without limiting their vital energy.

In Machusla, a ‘roly-poly’ somewhat clumsy animal she had actually ridden herself, Olak saw qualities many would not have detected. “As a painter, you understand, once you get going, that a painting has a life of its own, and it takes off and you just go with the flow, right?” she remembered.

“Well I realize what I did, was I got Machusla’s spirit, but it doesn’t look like Machusla at all,” Olak said. “She was always so willing to please, and so excited to be ridden, and she had this wonderful spirit.”

The negative space in Olak’s works is often linen instead of canvas, with the horses rendered in charcoal and acrylic. The works aren’t behind glass, so she has finished them with a polymer medium and varnish to fix and protect the actual image.

In some of the paintings Olak has included calligraphic elements. “A lot of my abstracts are like writing,” she said. “My mentor when I was young was Jack Wise.” An artist known for his eastern philosophy, mandalas and calligraphy.

Olak is the featured artist at Rainforest Arts in Chemainus for the months of May and June. She will have an Artist’s Demonstration at the gallery, 9781 Willow Street in Chemainus, May 11 from 1 to 3 pm. Go to RainforestArts.ca for more info.

The wait is over! The Rainforest Arts Gallery will reopen on July 8 at 11 am. Interim operating hours will be Wednesday to Saturday, 11 am to 4 pm. Click for details. 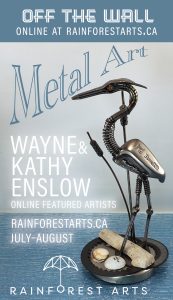 Please enjoy “Metal Art”, our second virtual Featured Artists exhibition, by metal artists Wayne & Kathy Enslow. You can find it on the Featured Artists page along with all our previous featured artists.